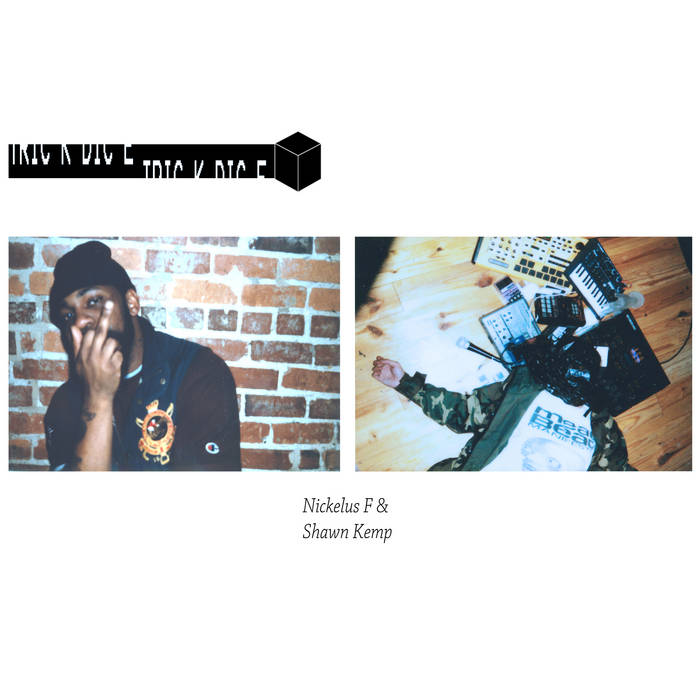 blucksy Gud shit nick and trav Favorite track: SIDE B.

shallowarchive // nick f's versatility fits perfectly on beats that seem to not like their own presence, even though their subtleties end up becoming as catchy as the hooks themselves. this is hip hop that can't give a single fuck even when it all feels perfectly and beautifully planned // Favorite track: SIDE B.
more...

I first heard Nick Fury back in 2003-ish. “Pistols & Teks Vol 1” had been getting passed around and a burned copy had managed to find it's way into my friend Tim's sketchy looking dirty ass Nissan Altima. Tim, being a lifelong Hip Hop head, but more importantly, a recently corrupted Edge-man, had just freshly discovered the unparalleled gratification of being really really really really high while listening to Hip Hop, which he affectionately referred to as “getting laced”.

Getting laced required a 2-liter bottle and a copious amount of mid-grade weed, and if done properly it was determined that at the right volume, the precise moment that Nate Dogg's verse drops on “So Fly” by 213, a grown man could actually die and see his own ghost “Diddy Bop” out of his body.

Nick said back then on the track “Richmond”:

“Round Here/There's probably more herb than coke/But that's Richmond for you, partner/We some 'herbin' folk”

It was pretty accurate. Its possibly an unachievable task to count how many measly shake filled white owls were smoked while breaking down every track on “Pistols & Teks”in an Altima in 2003 and 2004.

Every single line on that mixtape was a punchline. It was ridiculous, but simultaneously, it never seemed to try too hard. It remained super lyrical without ever once attempting to hit you with a “Super Voltron metaphysical missle in your physical's visual tissue”. Instead Nick was just going to simply “Put a hole in you/Then put you in a hole” or maybe you would just end up with “your noodle on the floor like dropped spaghetti”. He also let you know that "he kept the barrel around him like cartoons without pants on". Rapid, concise and direct battle bars that were a welcomed departure from the insane amount of “verbally murderous” and “certainly surgical” Def Jux and Necro records that i was constantly listening to in the early 2000s.

I think aside from the sheer hungriness of Nick's bars on that record, we couldn't get over the fact that he was from Richmond. At that point in history and arguably still, Virginia's relationship with Hip Hop has been less than monumental. Aside from The Neptune's “jiggy-lazer”style domination of rap production in the late 90s, or Missy and Timbaland. Outside of VA, most people don't even know any of them were actually from here. I know Clipse had a track called Virginia, and i got hyped when i saw FamLay had a video with Lil Flip on Mtv2, but even still, none of those people were from Richmond. Nick Fury was a Richmond dude, and not only that, he was definitely competent enough to hang with any of those artists.

Over the years, I followed Nick's career close. I watched Nick Fury change to Nickelus F, 106 and Park Freestyle Friday Champion, Drake collabs, and a consistent stream of quality mixtapes that only got fucking better with each drop.

Finally getting to work with Nick was crazy for me, because i was coming at it as such a fan. Its been one of the most serious highlights to whatever the fuck it is that I've been doing with my stupid life for the past few years.

Trick Dice isn't really an album as much as it is a compilation. Tracks we started and finished and started over and redid and reworked, forgot and remembered, lost and found. I feel like its important for a producer to work against the MC as much as it is to work for them. I think especially when you have a MC that's as versatile as Nick you need to challenge that skill and really try to get the most original content out of them. Maybe you don't have to do that, maybe that's why i don't work with many people. Regardless, Nick was always down to spit on anything i sent over and i think we ended up with interesting tracks because of that.

Trick Dice is a dirty record. It feels mish-mashed, it feels live, it feels uncut or unedited or something. To me, listening to it conjures the imagery of what i love about Hip Hop. It's a cut and pasted scratched together, beat up composition book with a busted spine, filled to the brim with rhymes scribbled in wild handstyles and doodled bubble dollar signs. It's raw saturated blown out soul and breaks chopped through dusty speakers. Scattered styles and schemes done for no other reason than to do it. Or better yet not done at all. The rap music that you make in your head instead of doing homework, where the whole movie about your ill career plays out in front of you. I'm sure this is only what i see, but it's the only reason any of my shit exists.

Shout out to Nick Fury.

Richmond Virginia: Recognize the real MCs in your vicinity (not me) and support them!

1.PROPER INTRODUCTION
2.INTANGIBLE
3.FLAUNT THE GIFT
4.AT YOUR REQUEST
5.EVERYDAY THE SAME
6.TALK2ME
7.STEPPED ON
8.FLYX5

1.Un
2.WATCHIN U
3.NITE AFTER NITE
4.WHAT I MEAN? NICKELUS F FREESTLYE
5.TEAR THE FUCKING CLUB UP
6.KRYSTAL KLEER
7.DEAD PEOPLE IN THE PLACE 2B
8.COMMITTED TO NOTHING

all tracks produced by SPAWN WIMP

Bandcamp Daily  your guide to the world of Bandcamp